+++Feel free to skip below this meandering exploration of risk to the night’s details, or read on for some random thoughts that may spark a story you can share on the night+++

Christmas is a time of injury. Think free-time + new toys + instant crowd. Forget the kids. Picture that Aunty impressing the nieces on a Pogo-stick, or that dad showing his son how skateboarding was done back in his day. *Gulp*

As one who loves rock-climbing, snapped his neck in a gymnastics accident, and still commutes on a motorbike most every day, I get this extreme sports high risk fixation. We want to feel alive … to free fall, and hopefully find a soft, immersive landing. Ta da! Sadly it only sometimes plays out this way. Understandably, we all have our limits. I’m comfortable weaving through traffic on two-wheels in the rain. But watching my 15 year old nephew pull a wheelie at 70km/hr on his dirtbike gives me the willies. And as for performing a ‘superman’ while launching off a ramp—I’ll leave that to motocross professionals.

So, when did you last task a RISK?

Definitions vary, but pay attention to the valence. Risk has a negative aspect. It’s the possibility of loss or injury: peril; someone or something that creates or suggests a hazard. In other words, risk is the exposure to the likelihood of injury or loss; put simply, it’s a dangerous and chancy choice.

But, it also has a positive valence. From wiki’s fount of wisdom, risk is equally the potential of gaining something of value, whether that be physical health, social status, emotional well-being, financial wealth, or even friendship.

Think of how these elements map onto the biggest risk you’ve taken.

It’s no artificial segueway to see that this is now about that. This worldly risk is also about that greater good. As Søren Kierkegaard, the great Danish Father of modern existentialism, averred, we are all limited and biased, finite and fallen fleshly creatures. Life is fraught with risk. Beyond self-interested dares in our Red Bull age, we need courage for wings to fly. We are all faced with the choice to pull back from the edge, or take a whole-hearted “leap of faith”. Perhaps this jump is into the dark, or into the light? Reflect, to be sure, but then you must launch to truly live. (Or, in other parlance, run the numbers before undertaking risky business.) It’s trust, risk, fear and hope all rolled into one, a self-involving decision to go beyond the known and often put ourselves at the mercy of the elements and an uncertain onlooking crowd.

Turning to the biblical story, then, we might rightly wonder if the Triune God—Father-Son-Spirit—is prone to risk-taking? Can God even take a risk, given the above definition? If you hold to the medieval philosophical framing of God being, by definition, omniscient (all knowing), omnipotent (all powerful), omnipresent (everywhere), and ultimately impassible (unchanging, and therefore unaffected by what happens in our world), then you would have to answer no. God knows the outcome of every divine and human action, has the power to ensure all gain and no loss, is spiritual/disembodied posing no risk of suffering even if things went pear shaped, and thus experiences no pain or pleasure due to the actions of others.

If you’ve actually read the biblical story, you’ll rightly wonder about whom these descriptives apply. As Blaise Pascal penned in the inside of his jacket, discovered only on his death (see here), our fiery Creator is the “God of Abraham, God of Isaac, God of Jacob, not of philosophers and scholars.” God is passionate, invested; God suffers with, ultimately for his glory but in a way that wraps us into the action as agents with a genuine role to play where all win or lose together. Still, is risk possible? 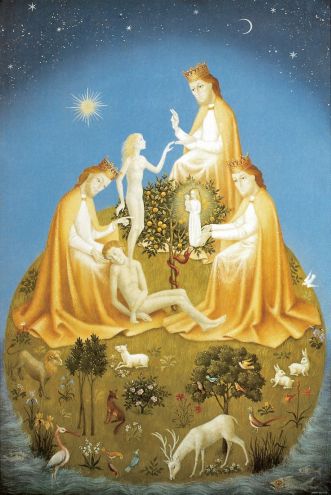 Test case: Creation. The all-sufficient Risk-Taker whose essence is communion, overflowed in the perichoretic dance to creatively birth the cosmos. The motivation was love, and the reward was shalom, weaving us together through right relationship with God, neighbour, self and creation, all pointing back to its transcendent source. The risk is for everyone, not simply God in a zero-sum game; holistic flourishing, like African Ubuntu, means “I am, because we are”—one interconnected fabric. There is genuine risk, for the outcome is open. Preservation of love requires the extension of freedom; the Creator gifts agency to creation, where humans can accept or reject the overture and subsequently screw up God’s good world. ‘Sin’ results in suffering and requires intervention to fix the mess.

So far, so good. And yet, apart from some process theology overlay where the Creator is within time and unfolding with creation, it would seem that God knows the actual risk. He is both sovereign and all-seeing. Short of coercing the outcome, God still stands apart from Creation, and can perceive where it will all go. Adam and Eve’s rebellion didn’t take God by surprise. Granted, it “grieved” God that we rebelled (Genesis 6). And yet, like a parent disciplining a child saying “this will hurt me more than it hurts you”, the watery punishment of Noah’s flood physically inflicted only flesh-and-blood creatures. For God had no skin in the game. 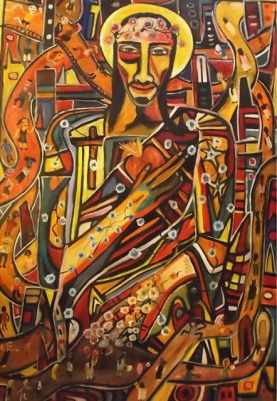 Like I said, though, Christmas is a time of injury.
It’s the time we remember the ultimate risk of incarnation.

The Word became flesh and blood,
and moved into the neighborhood.
We saw the glory with our own eyes,
the one-of-a-kind glory,
like Father, like Son,
Generous inside and out,
true from start to finish. 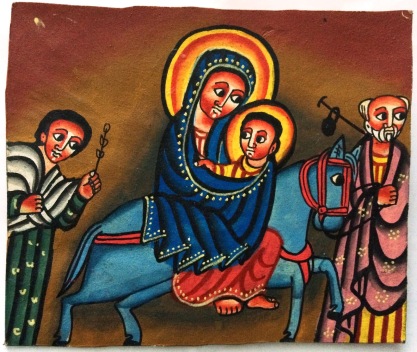 The unlimited, all knowing, all powerful Creator, tied himself to matter and was confined to a crib in a baby’s body. God hurt. And forget those romanticised Christmas carols: “meek and mild, no crying he makes”. No, this was first century Palestine, no more peaceful than today (cf. here). If I was God, I’m pretty sure I wouldn’t choose this time and place to be born. Forget the bright star and warm stable; this was a vulnerable adolescent mother out of wedlock bearing a child, heading to an outback census under threat of angry authorities wanting to keep their power. This was more like the war-torn grab in the stunning movie, Children of Men—a world ripped apart by violence over scarcity of resources and infertility, but gripped by the hope found in a new-born babe. Cease Fire! Would you risk incarnation if modern day Syria was the landing point?

As we read in Philippians 2:5-11, the uncontainable God “gave up his divine privileges; he took the humble position of a slave and was born as a human being [w]hen he appeared in human form ….” That’s kenosis. Theological minds boggle: in what sense and what way can God be limited and still, in identity, remain ‘God’? And yet, the point is clear. God, while sovereign, gave up his right to control the game. He was at the mercy of the onlooking crowd. This was the ultimate risk. No soft landing and immersive embrace on planet Earth. 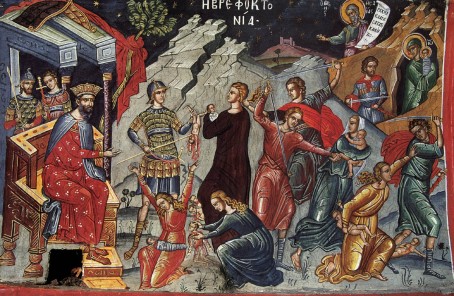 It’s captured well in the iconic Greek Orthodox painting “Slaughter of the Innocents”. Granted, the statistics suffer symbolic inflation over this feast honouring the “14,000 slaughtered children”. In reality, King Herod’s blood-lust cost around 40 baby boys their lives (cf. Matthew 2). The Christ was spared, thrust like a modern day political refugee to the relative “safety” of Egypt. And yet, the number represents the countless lives torn apart and destroyed by despots hell-bent on asserting their preeminence, especially standing against the Lord’s anointed (Psalm 2). 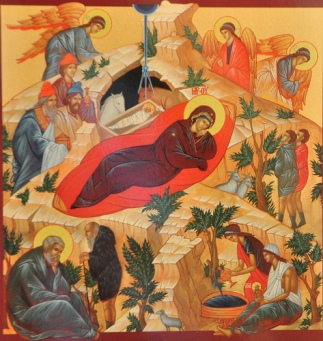 The risk of incarnation led inexorably to the crucifixion, the final relinquishment of divine power, not for personal gain, but that all may be set free from the ultimate demonic despot, finding life in renewed relationship with God, neighbour, planet and self. Literally, this risk offered a sign, a fore-taste, of “peace on earth”. Kings in palaces were oblivious. But shepherds, simpletons, and wise magi prepared to travel got front row on the spectacle and angelic Hallelujah chorus (beautifully depicted in St. Paul’s Arts and Media’s 2010 “Christmas Story”).

This paradoxical risk and revelation is poignantly captured in G. K. Chesterton’s poem, The Nativity. He riffs off Isaiah 9:6-7, juxtaposing a helpless child with just and powerful rule.

Transposed into the modern world, where facing today’s Herods requires the combined courage of Mary and the Messiah, Chesterton composed this poem:

The thatch on the roof was as golden,
Though dusty the straw was and old,
The wind had a peal as of trumpets,
Though blowing and barren and cold,
The mother’s hair was a glory
Though loosened and torn,
For under the eaves in the gloaming
A child was born.

What know we of aeons behind us,
Dim dynasties lost long ago,
Huge empires, like dreams unremembered,
Huge cities for ages laid low?
This at least—that with blight and with blessing,
With flower and with thorn,
Love was there, and his cry was among them,
“A child is born.”

Though the darkness be noisy with systems,
Dark fancies that fret and disprove,
Still the plumes stir around us, above us
The wings of the shadow of love:
Oh! Princes and priests, have ye seen it
Grow pale through your scorn;
Huge dawns sleep before us, deep changes,
A child is born.

And the rafters of toil still are gilded
With the dawn of the stars of the heart,
And the wise men draw near in the twilight,
Who are weary of learning and art,
And the face of the tyrant is darkened,
His spirit is torn,
For a new king is enthroned; yea, the sternest,
A child is born.

And the mother still joys for the whispered
First stir of unspeakable things,
Still feels that high moment unfurling
Red glory of Gabriel’s wings.
Still the babe of an hour is a master
Whom angels adorn,
Emmanuel, prophet, anointed,
A child is born.

And thou, that art still in thy cradle,
The sun being crown for thy brow,
Make answer, our flesh, make an answer,
Say, whence art thou come—who art thou?
Art thou come back on earth for our teaching
To train or to warn—?
Hush—how may we know? —knowing only
A child is born.

Returning, then, to our key theme, and inspired by Parker Palmer’s reflection below (cf. here): What dynamics underlay your greatest risk? How did it impact you, and who was it for? What values stood to be gained, or goods did you risk to lose? What motivated your leap of faith, and how well could you predict the outcome? … Taking it even deeper in this Christmas season, let’s put skin on it. What are you are willing to risk to embody your deepest values? Where do you find the courage to take on the risk of incarnation, embodiment, and sacrifice for the life of the world?

Let the conversation begin! … Bring food and a story to share, and join us as together we explore RISK taking as one of life’s great phenomenon.

QUARRY, EVERY SUNDAY 8AM here:

Why I wrote The Paradox of Happiness

Can I Pray for my Country at the World Cup?